In short, as the merger program proceeds with the newest concept of Proof-of-Merger (POM), the TNC headquarters will also receive operational tokens at the same rate.

“We at TNC will proceed with a new merger verification method, in which the tokens to be released in the market are adjusted according to the progress of the project. That said, we strive to complement the shortcomings of existing ICO companies and establish themselves as a more competitive system,” said the company in a statement. 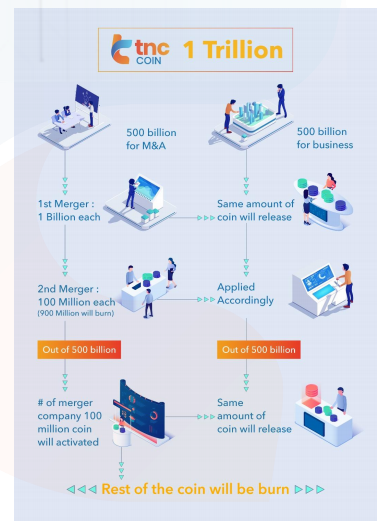 What is the Proof-of-Merger method?

The Proof-of-Merger method is an operation carried out by TNC with its mergers securely within the TNC mainnet. The process starts with pre-issued coins agreed upon in the Crypto M&A token swap agreement. After proceeding to the token swap, the allocated coins are equally divided among the mergers.

Whenever the merging process has concluded, the TNC Coins related to this operation will be released at the same rate in parallel. In addition to this, if the current volume — as per the merging date — is different from the swapped coins during the merger, the difference will immediately be burned.

The whole process is guaranteed through our Proof-of-Merger consensus system, a method that facilitates automatic token burning to sustain coin price in the market. Proof-of-Merger also ensures that all foundations, merger companies, and users exist under fair conditions.

As mentioned before, as a result of these changes, preferential treatment will be given to the first five merger companies. In order to proceed with the project with the meaning of the start of the first merger, the users of the first five companies and the coins held by each company have a staking treaty rather than incineration,
so that the difference from other companies is to be made.

Rather than no proceeding with the incineration of the currently granted TNC Coins, “we intend to borrow a system of Proof of Stake that supports annual interest of 20% for the amount of coins that are staked for on year and staked monthly,” added the company.

“Therefore, we aim to prevent the market overload and maintain fairness with 2nd and 3rd batch of mergers. TNC, which has now migrated to its mainnet coin, is ready to be adopted through exchanges and the novel Real Research platform.

After 2 years of long preparation for this project, we are now trying to bring blockchain technology to the world as a truly decentralized system. We are currently preparing for listing with exchanges quickly, so look forward to it,” TNC commented.

According to above chart, the coins of users who have staked are paid sequentially after 12 months and receive annual interest of 20% every month. 90% of staking is paid interest, and 10% of unlocked coins and interest can be transferred directly to the exchange.