How much incentive pay do full-time workers in the UK receive each year? Research collated from Aaron Wallis Sales Recruitment breaks down the state of UK incentive pay in 2018 based on a collection of Office For National Statistics datasets. A study into bonus pay in the UK has investigated which full-time workers are most likely to earn the highest bonuses with the results suggesting that the highest amount of incentive pay comes from male workers in the capital during the latter stages of their career. These are, according to the Office For National Statistics, “Incentive pay is the amount paid to an employee as a result of meeting a performance or productivity objective, including profit sharing, bonus, piecework and commission payments.”

The regional difference within the UK for incentive pay is striking where a full-time private sector worker in London receives on average over three times the national average: 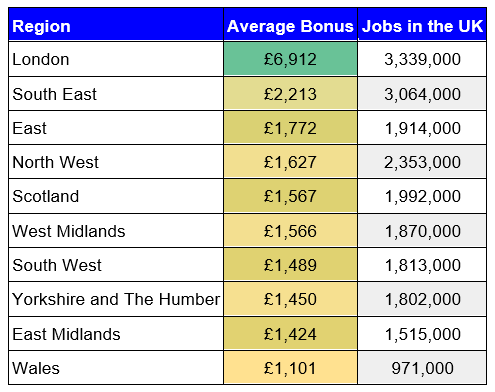 The gender pay gap is a big discussion point in the UK today and it looks to be just as much reflected in bonuses as it does in gross annual income. In 2018 the average full-time working male took home £2,613 in incentive pay, whereas the average female took home £1,158. When broken down by both age and gender, the data points to the cause of the disparity; males between 40-59 tend to earn around twice as much incentive pay as females, taking home an average of around £3500 per year: 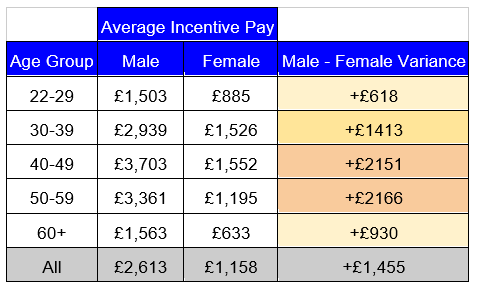 Aaron Wallis has also collated data from the ONS on bonus pay by job-type, defined by two-digit SOC code. Corporate managers and directors take home the highest average annual bonus, with just under £8000. After this, professional services under business, media, public service and science tend to do well, averaging just over £2000 a year in incentive pay. 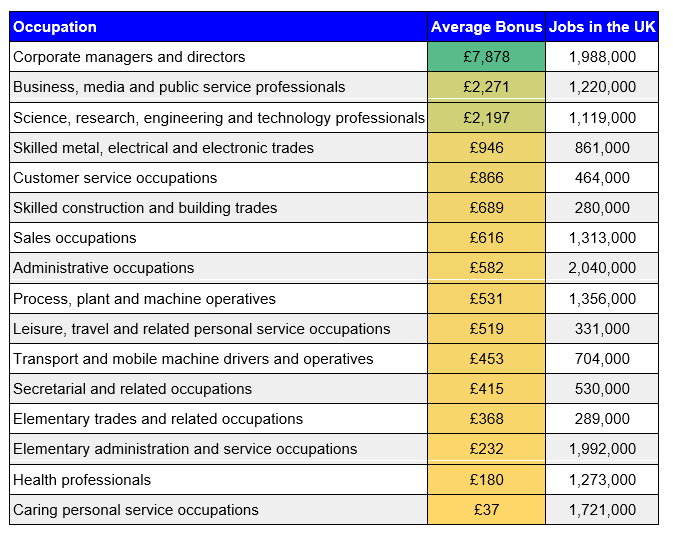 Using ONS datasets over the last 15 years, research from Aaron Wallis suggests that incentive pay in the private sector has still not completely recovered following the 2008 recession: Rob Scott, Managing Director at Aaron Wallis Sales Recruitment said: “Particularly in private sector roles like sales or recruitment, incentive pay forms a key part of workers annual income and it’s important for both employers and workers to make sure they’re keeping up with the trends of bonus pay in the market.

Encouragingly, our research suggests that bonus pay is on the rise with average private sector bonuses seeing consistent growth since 2015, however, this is still a long way off the bonuses which UK workers were receiving before 2009.”

The study was conducted by Aaron Wallis Sales Recruitment, using data from the Office For National Statistics, analysing and combining different datasets published between 2004 and 2018. Data has been collected from the ONS's Annual Survey of Hours and Earnings (ASHE), which for 2018 was published on the 25th October. Aaron Wallis’ write-up of the study was published on the 27th December 2018. Using a sample size of 1% of earners on PAYE tax taken from HM Revenues and Customs (in real terms around 300,000 workers in the UK), the datasets from the ONS provide valuable and statistically significant insight into earnings of UK citizens.

The Principles and Concepts of Software Architectural Design