Affluent Population in China to Surpass 56 million Mark in 2022

Affluent Population in China to Surpass 56 million Mark in 2022

Despite the recent trade dispute with the US, the number of Chinese affluent individuals has been growing at a healthy pace. The country is home to the second-largest affluent population in Asia and the third-largest globally, behind only the US and Japan.

Together, China and Japan are home to more than two-thirds of the region’s affluent population. However, growth in China notably overshadows that in Japan. While the number of affluent individuals in Japan is forecast to record an AAGR of 2% between 2018 and 2022, China will impress with an AAGR of 9.7% over the same period.

Shivani Gupta, Wealth Analyst at GlobalData, comments: “This growth will be driven by rising levels of urbanization, infrastructure expansion and high investment inflows in the country. Going forward, the number of Chinese affluent individuals is forecast to grow at a similar rate, reflecting the country’s positive economic growth.” 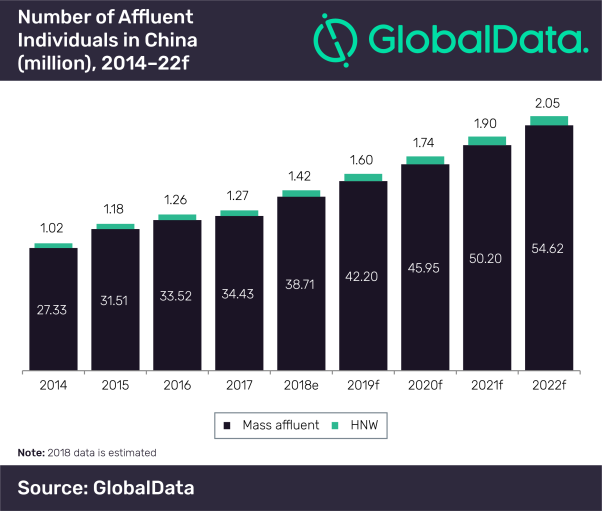 The growth of affluent individuals in China is expected to be particularly pronounced for HNW individuals, who are anticipated to record an AAGR of 10% over the next four years, making China one of the most attractive wealth markets globally.

Shivani concludes: “Strong predicted retail investment growth coupled with a rise in income levels is anticipated to drive growth in affluent individuals in China over the next four years.”

An Overview Of A Holistic Metaversive Environment: The Ultimate Infographic

The New Metaverse Should Work For All, And Businesses Should Lead The Change

The Reasons Behind Apple’s Customer Loyalty: Insights from a Marketing Expert

Is a 4-Day Working Week the Opportunity to Broaden Your Skills?

The Reasons Behind Apple’s Customer Loyalty: Insights from a Marketing Expert